THE National Association of Patriots has waded into the 2013 Lahad Datu intrusion controversy by claiming politicians made it difficult for the soldiers fighting the incursion.

Slamming the then Barisan Nasional leaders for behaving like generals, Patriot president Mohamed Arshad Raji said today these politicians must also explain claims that these intruders were actually upset over not being given the land they were originally promised. 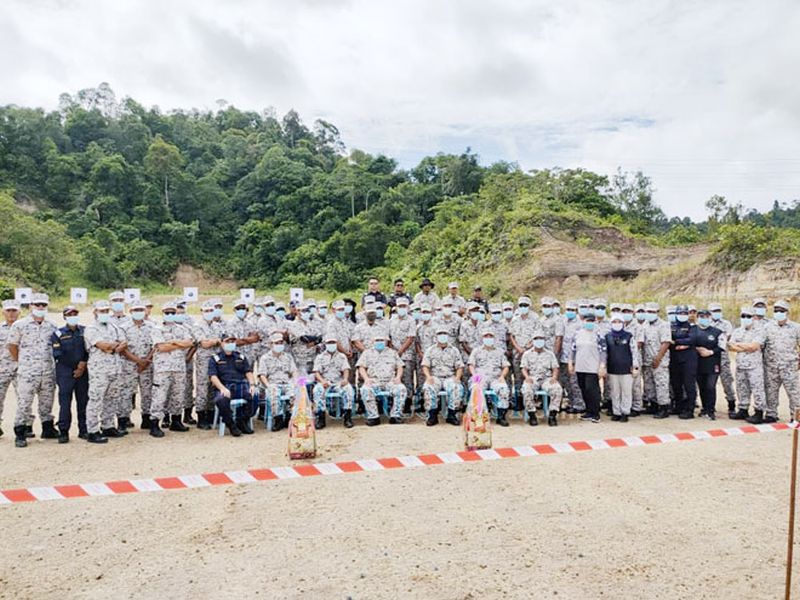 “We have one asset currently in the area 24/7 to monitor and safeguard the sovereignty of the country.

“It is undeniable that there is a China asset in the area all the time,” he told reporters after earlier officiating at a shooting competition organised by the agency here yesterday.

He said even though the Malaysian and Chinese vessels are just some 20 nautical miles from each other, there has never been any confrontation between the two sides.

“I think they are just putting their asset there, and we too are doing the same. Other countries are not involved in this,” he added.

Beting Patinggi Ali, located just 84 nautical miles from the coast here, is one of the largest and least-known reef complexes in the South China Sea.

THE mega River of Life project’s completion date has been extended by another four years to 2024 but it is already proving to be a stellar urban river restoration initiative.

In January, it was listed in the world’s top 10 waterfront districts by the Independent, a UK newsportal. 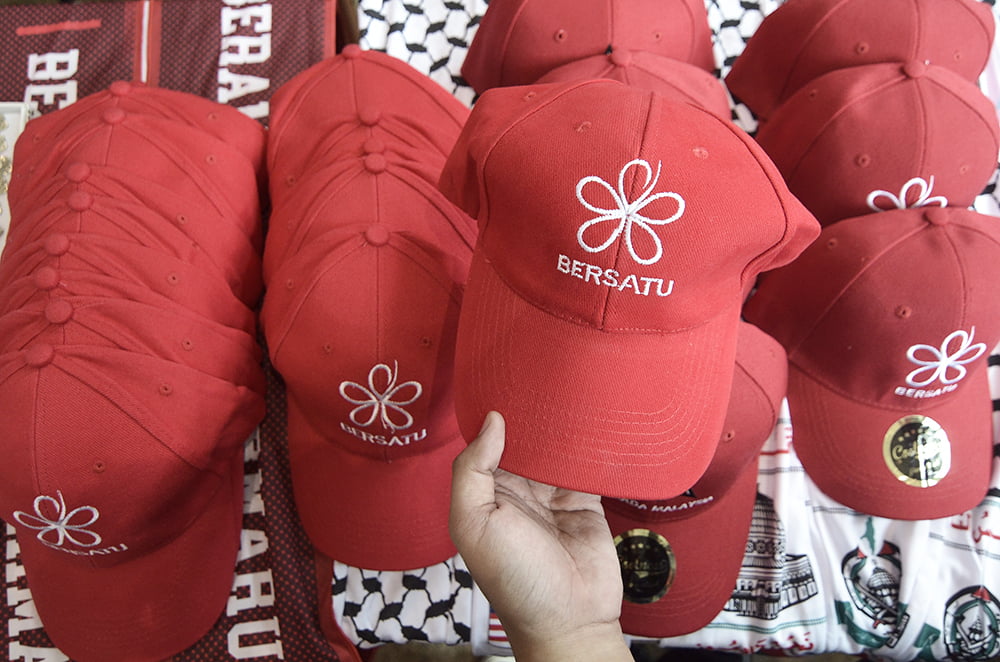 He said as part of the same Perikatan Nasional pact with the ruling Gabungan Parti Sarawak coalition, Bersatu only wants the best for all Sarawakians especially those living in rural areas.

“With the basic facilities which had been provided in most of the rural areas, the people would enjoy the overflow of socio-economic activities.

Jaziri said this when officiating at the laying of the foundation of Rumah Sanggong Japar at its new site in Sungai Teba, Sebauh here on Tuesday, which was attended by some 200 people.

He added the party’s next target is to provide rural folk in Sarawak with digital connectivity which can help provide the people with opportunities in education as well as the economy.

“It is very important to produce a high-potential generation from rural areas that will be as competitive as those from other states and even foreign countries,” he said.

Meanwhile, Bersatu Sarawak information chief Duke Janteng, who was also present, spoke on the purpose of establishing the Bintulu Community Welfare Club which he chairs.

He said the setting-up of the club is to ensure the welfare and basic needs of the local community would always be given priority.

“The club will continue to be a bridge and a channel to highlight the voice of the people to the various ministries and government agencies so that their rights and needs will be protected and guaranteed,” he said. — Borneo Post 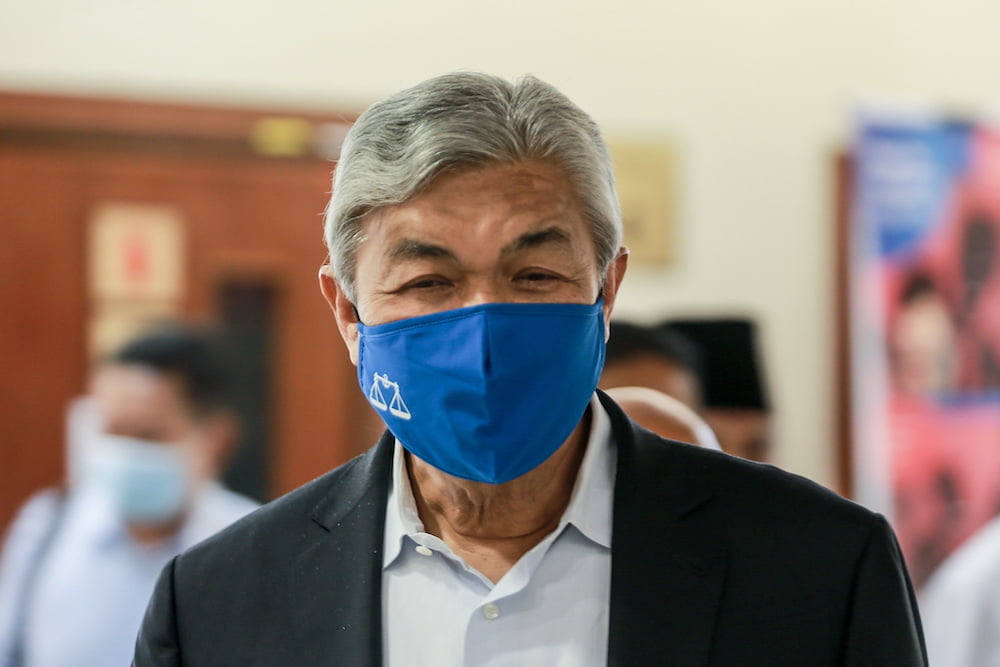 His trial was paused two days ago after another one of his lawyers, Hamidi Mohd Noh sought the High Court’s permission to vacate hearing pending the results of a Covid-19 swab test, the Reverse Transcription Polymerase Chain Reaction (RT-PCR) — which is considered to produce more accurate results.

The first test was understood to be a Rapid Test Antigen Kit (RTK) test, which the Health Ministry previously said may produce false negative results for an average of one in 10 people.

Hamidi told High Court judge Collin Lawrence Sequerah on Monday that Zahid’s second test results were expected to be available by Tuesday evening. He did not disclose in court the reason why Zahid went for the two Covid-19 tests.

A check of Zahid’s official Facebook page indicated that he was in Sabah last week and throughout the weekend in conjunction with the Sabah election campaign.

Justice Sequerah agreed to the defence lawyer’s request, adding that the trial would resume next Monday as previously scheduled if the second test returned negative as well.

Zahid was said to have gone for testing at the private KPJ Tawakkal Hospital here on Monday when the court broke for lunch.

The campaign period for the Sabah state election is for two weeks from September 12 to September 25, with polling this Saturday.

Last month, Zahid succeeded in having his pre-scheduled trial dates of September 23 to September 25 vacated, as he intended to go to Sabah to assist in BN’s election campaign on those days and as his lead defence lawyer Hisyam would be handling other court cases in Putrajaya on September 23 and September 24.

In this trial, Zahid ― who is also a former deputy prime minister and former home minister ― is facing 47 charges, namely 12 counts of criminal breach of trust in relation to charitable foundation Yayasan Akalbudi’s funds, 27 counts of money-laundering, and eight counts of bribery charges.

Also on Monday, Umno supreme council member Datuk Mohd Razlan Muhammad Rafii was reported as having tested positive for Covid-19 while campaigning in Sipitang, Sabah via a rapid test kit, and was also reported as waiting for the results of a RT-PCR test with hopes of getting a false positive result.

THE FBI and the main US cybersecurity agency warned yesterday that provocateurs could take advantage of a slow vote count in the November 3 election to spread disinformation aimed at discrediting the results.

“Foreign actors and cybercriminals could create new websites, change existing websites, and create or share corresponding social media content to spread false information,” around the election, the FBI and Cybersecurity and Infrastructure Security Agency said in a joint statement.

ANWAR Ibrahim is to make a major announcement today, as speculation mounts that the opposition leader has the numbers to be the next prime minister.

Talk has been rife since the beginning of September that the PKR president has thrashed out a deal with Umno and Sarawak lawmakers for a parliamentary majority in the 222-seat Dewan Rakyat. 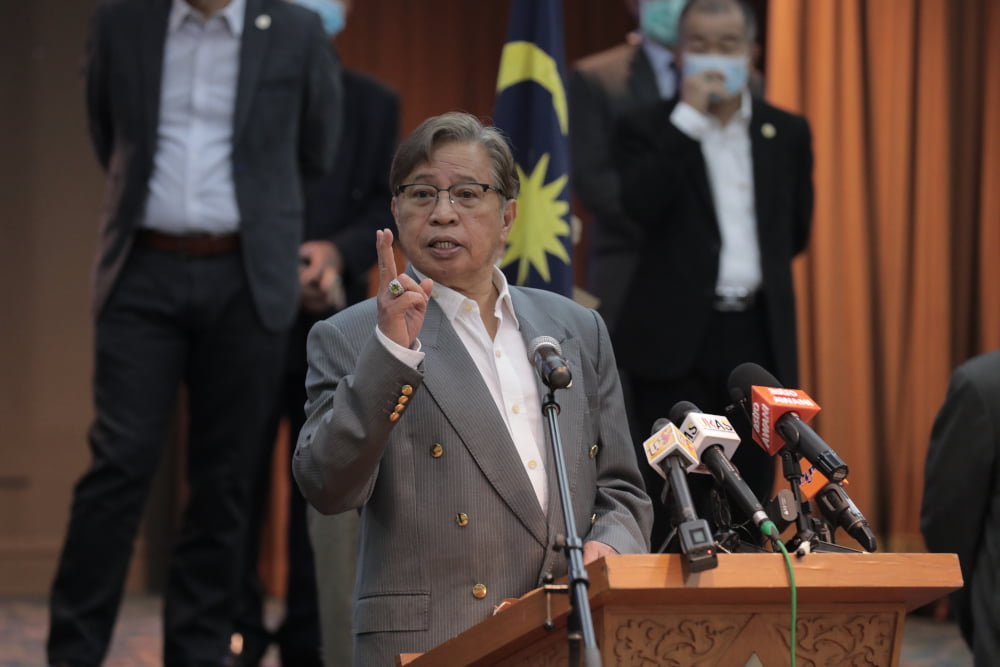 KUCHING, Sept 23 — Chief Minister Datuk Patinggi Abang Johari Tun Openg has clarified that the RM2.95 billion in state sales tax collected from Petroliam Nasional Berhad will not only be used for the training of Sarawakian students in the state’s international schools.

“Part of this money. You’ve got RM3 billion meant for development, of course education is part of it,” he told reporters after the earth breaking ceremony for the Sarawak State Farmers’ Organisation (PPNS) headquarters here yesterday.

The chief minister was commenting on an article in The Borneo Post on Sunday under the heading, “Petronas sales tax for training,” in which he was reported as saying that the state government will use the Petronas SST to finance the training of the students.

The national oil corporation and its subsidiaries had paid up the SST for 2019 last week after withdrawing its legal dispute with the state government over its powers to enforce the tax last January.

Abang Johari had also said at the function yesterday that with SST paid, the government could now step up its development plans for the state.

He said, among others, that the rural areas would see greater growth. — Borneo Post

A VACCINE for Covid-19, once it is found, must be accessible to all nations and peoples, said Prime Minister Muhyiddin Yassin.

Delivering Malaysia’s national statement at the high-level meeting of the United Nations General Assembly (UNGA) to commemorate the 75th anniversary of the UN, he said there should not be any discrimination whatsoever in that aspect.

US government scientists reported yesterday that the Arctic Ocean’s floating ice cover has shrivelled to its second lowest extent since satellite records began in 1979.

Until this month, only once in the last 42 years has Earth’s frozen skull cap covered less than four million sq km.