malaymail.com | 08-May-2021 – KUALA LUMPUR, May 8 — A recent survey has found that Malaysian youth have mixed views on the country’s future, with 46 per cent saying it is heading in the “right” direction, while another 42 per cent believe it is going the “wrong” way.

According to Merdeka Center’s “National Youth Survey 2021”, the most prevalent reasons cited by youth with positive sentiments were administration (17.6 per cent), leadership (11.6 per cent) and economic concerns (9.1 per cent).

This was followed by social and public safety (4.9 per cent), along with development and infrastructure (3 per cent). 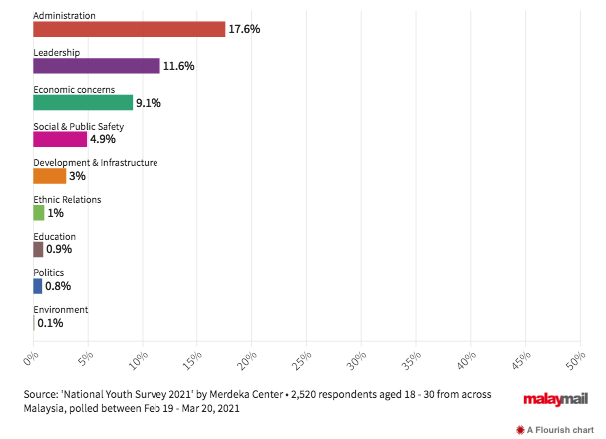 For those that believe the country is going sideways, politics (24.7 per cent), economic concerns (20.9 per cent), administration (9.6 per cent), health (8 percent) and leadership (5.6 per cent) were the most frequent concerns mentioned.

Corruption was among the lowest concerns listed, with only 0.8 per cent of those who held a negative view saying it influenced their perspective, as were education (1 per cent), along with social and public safety (1.3 per cent). 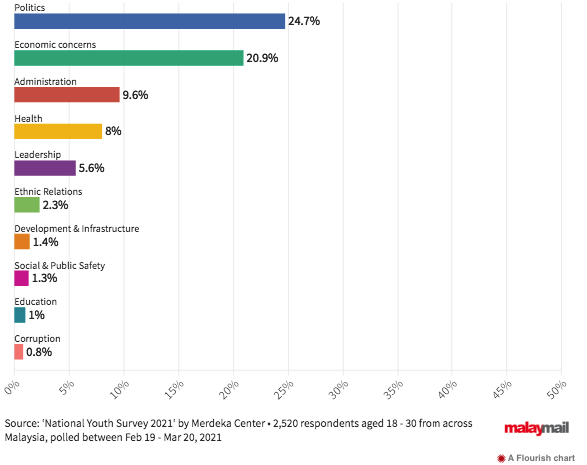 Furthermore, 70 per cent of youth polled said they were uninterested in information related to politics.

Of that percentage, 66 per cent believe that politicians “do not care what people think”, while 78 per cent said that politics and government seemed beyond their grasp.

When asked if they identified more with their ethnicity or nationality, 46 per cent of respondents said it was an even split.

This was followed by 40 per cent who said feeling Malaysian took precedence.

Only 11 per cent said they identified more with their ethnicity than their nationality.

The survey did not reveal which respondents were more likely to identify with their nationality or ethnicity, based on their ethnic background.

Two per cent refused to answer or were unsure.

Similarly, 94 per cent of them agreed that “Malaysians need to put multiculturalism at the centre of society and celebrate an inclusive Malaysian identity that embraces all races and religions”. Only 3 per cent disagreed.

This data was taken from the results of a study conducted by the Merdeka Center between February 19 and March 20, 2021, with 2,520 respondents aged from 18 to 30, from all states across Malaysia.

The respondents were equally divided between female and male, and further demarcated by race; their location in urban, semi-urban and rural settings; and if they are registered voters.