He garnered a 69 percent approval rating.

The survey also suggested that Perikatan Nasional (PN) was the best received political party or coalition – better than Muafakat Nasional or BN.

The majority of Malay respondents also supported Umno and PAS’ participation in PN.

Merdeka Centre also noted that 57 percent of Malay respondents agreed with the verdict.

The survey – conducted between July 15 and Aug 10 – involved 3,415 respondents who were selected through random sampling throughout the country to reflect Malaysia’s electorate.

It is apparent from Merdeka Centre’s data that it conducts voter perception surveys monthly, but only conducts periodical public releases. The last release was dated July 26, 2019.

This was despite rhetoric from opposition parties branding him as a “traitor” who worked with “kleptocrats” to depose a democratically-elected government in late February.

Merdeka Centre noted that only 33 percent of Chinese respondents viewed Muhyiddin positively while he enjoyed overwhelming support from the bumiputera community.

Muhyiddin also had the support of younger respondents, receiving more than 70 percent approval from respondents aged between 21 and 40.

Muhyiddin also received the support of 91 percent of the civil servants or those in GLCs.

When Merdeka Centre last released its survey findings in July 2019, then prime minister Dr Mahathir Mohamad primarily had the support of older voters. He only had the support of 57 percent of those in civil service or GLCs. He also enjoyed more support from those with household incomes of RM4,000 and above.

On political parties or coalitions, the new PN appeared to be the most popular political entity among respondents and was viewed positively by 51 percent of the electorate.

This result was surprising since Muafakat, PAS, BN, and Bersatu are all part of the PN government.

“The data seems to indicate that voters favour PN because (the coalition) is a unifying factor. 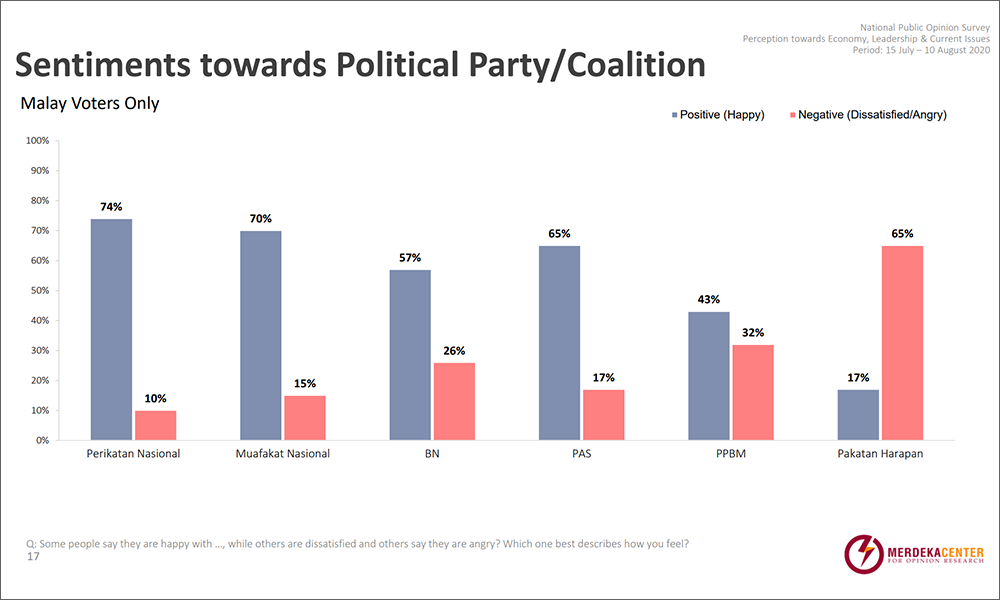 When asked if Umno and PAS should remain in PN, nearly two-thirds of Malay respondents agreed.

Currently, Umno has not committed to formally joining the PN coalition despite agreeing to form governments with PN component parties.

PN was formed in March and was envisaged as a move to unite Malay political parties and boot the “DAP-led” Harapan from power.

Only 50 percent of respondents working in civil service or GLCs were confident.

However, virtually all segments of respondents were in agreement that the court was right in convicting Najib, a former BN leader.

Majority of Malaysians satisfied with PM